Tax stats reveal the state of the Australian community

Every year, the Australian Taxation Office (ATO) compiles the tax data they collect. The recently released 2015-16 ‘tax stats’ encapsulate the data from 16 million income tax returns lodged for the 2016 income year for 13.5 million individuals, 940,000 companies, as well as superannuation funds, partnerships, and trusts.

Here’s some of what they found:

The occupation with the highest average salary is a surgeon on $393,467, followed by anaesthetists, internal medicine specialists, and psychiatrists. Legal practitioners came in seventh on an average taxable income of $198,219. Chief executives and managing directors came in ninth.

It’s worth pointing out that these salary statistics are the average taxable income of a particular occupation category – so, any deductions or losses the individual is able to claim have already reduced the salary represented. It’s not the salary that someone would be paid. These figures would also pick up a mixture of full time and part time workers. 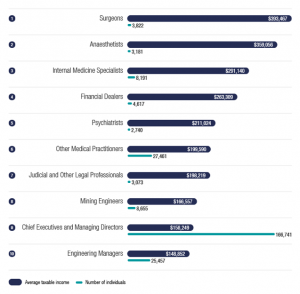 If you live in Darling Point, Edgecliff, or Point Piper (the 2027 postcode) you are in Australia’s wealthiest suburb with an average taxable income of $192,500. By contrast, postcode 2387, covering Bulyeroi and Rowena in far North East NSW, had the lowest average taxable income of around $12,000. Victoria has five of the bottom 10 postcodes with 3482 recording the second lowest average incomes nationally. 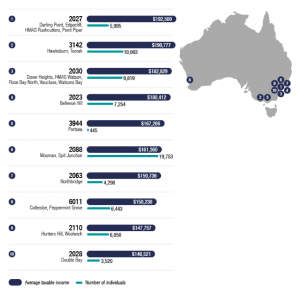 Who contributes the most tax?

Individuals contribute 52.7% of all tax collected, companies 18.9%, and superannuation funds 4.2%.

The sectors that contribute the most tax dollars were the financial and insurance sector (9%), followed by wholesale trade (8%), manufacturing (6%) and professional, scientific & technical services – that’s accountants, lawyers, managers, scientists, etc (6%). Mining only contributed 0.2% of the tax take.

When it comes to individuals, out of a working population of around 15 million individuals, less than 11 million of us pay tax (27% don’t pay any tax). Those on taxable incomes of $80,001 to $180,000 pay 39.8% of the tax paid by all individuals, averaging $30k per person. The highest income bracket ($180,001 and above) pay over four times more than the income tax bracket below them averaging $135,000 per person and contributing over 30% of the tax collected from all individuals.

Over $6.5 bn in capital gains tax was collected from individuals in 2015-16. As you would expect, the majority of this was from real estate (40.6%) with the remainder made up of other assets (39.7%) and shares (19.6%). Companies and super funds contributed over $5 bn in capital gains tax. Only 2.6% of gains made by super funds were from real estate.

Companies pay 18.9% of all tax. Around 14% of all companies paid no tax or made a loss, which is fairly consistent across the years varying by 0.3% for the last three years (lowest in 2013-14 and highest in the most recent statistics, 2015-16). The largest companies, which represent 0.1% of all companies, contributed 55% of the tax paid by all companies (over $36 bn). Medium sized companies were the next biggest contributor at 15.2%, followed by micro businesses, the largest group by volume, at 12.7% of the population of companies.

Where do we make our money?

Salary and wages are obviously the biggest category of income for individuals averaging $58,827 (up from $57,576 in the previous year). Once again, these figures represent taxable income, not the gross salary or wages someone earns.

We made over $42 billion in rental property income in 2015-16. Over 2 million people have an interest in a rental property, with almost 20,000 of those having six or more rental properties. Most however (1,494,837) have just one property interest. Net rental income has been fairly static over the last few years at -$3.6 billion (it was lowest in 2011-12 at -$7.9 billion before the Government reined in deductions).

What deductions do we claim?

Key take out:The statistics provide an indication of where you can expect the ATO to focus its compliance activities. Work related deductions, especially travel expenses, are a key area. Even if you only claim relatively small amounts, don’t assume that the ATO won’t query the deductions and ask to see evidence that proves you actually spent the money, you were not reimbursed, and the expenses were incurred in the course of earning assessable income.

While the average superannuation account balance is $115,945, the median is only $37,473, which is clearly not enough to self-fund retirement.

The average superannuation balance in the ACT is higher than anywhere else in Australia at $185,777 (median of $57,239) for males, and $157,981 (median of $47,364) for females. The gap between males and females is also likely to be less with the average super account balance for females 15% less than males. By contrast, females in Victoria are likely to have super account balances 25% less than males.

Key take out: There are some very real tax benefits to building the superannuation of your spouse using the super splitting rules.